Serving the local cycling community since 1977

Talk to Andy, Michelle or Martin for advice

We are the local BATRIBIKE Service Centre

Electric bike Sandwich Kent. Long established bike shop Locks of Sandwich, is an electric bike specialist and official dealer for Batribike electric bicycles. The cycle shop has been serving the cycling needs of Sandwich, Dover, Thanet and surrounding villages since 1977.  Locks have built a loyal customer base by going that extra mile and pride themselves on their honest advice and friendly service.

Situated very close to the south coast Sandwich used to be one of the Cinque Ports but is now slightly inland. It has however excellent local cycle routes that take in both the coastal views and the pretty Kent villages.

The Viking Coastal Trail from Pegwell Bay to Reculver is a 29 mile route on the Isle of Thanet peninsular. The route is so called because it is where Vikings first landed in Britain in 449AD. The route has both on road and traffic free sections. One section which is almost traffic free follows the sea wall from Margate to Reculver via Westgate-on-Sea.

Following National Cycle Routes 1 and 2 there is a route from Sandwich to Rye in East Sussex and almost half of this route is traffic-free. The route heads along the Kent coast, taking in stunning coastal cliff paths and quiet country lanes through atmospheric Romney Marsh.

Close by there is a 2 mile cycle path on Samphire Hoe. This unique wildlife haven was created from the waste chalk and soil that was removed to create the channel tunnel. 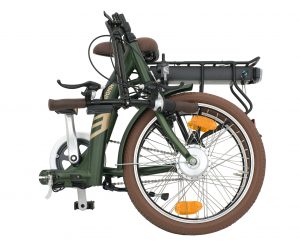 All the routes are ideal places to ride an electric bike. Whether you are looking for a bike for leisurely rides in the countryside or transportation for commuting an electric bike could be the answer. Easy to use and with varying levels of assistance available at the push of a button cycling has never been easier.

Why not contact Locks today and arrange to test ride an electric bike and see for yourself how easy they are to ride.