Why Choose an Electric Bike?

Electric bikes have grown in popularity and usefulness over the last few years. Modern styling and lightweight batteries have combined to change the image of these eminently practical machines. Ultimately their ease of use and range is having a wide impact on commuters and leisure riders across the UK.

E-bike and rider in harmony

Is it cheating? No its not! Electric bikes are about the rider and the bicycle working together so that hills and headwinds are easier. Most bikes have a sensor, which detects that the rider is pedalling and turns the motor on to assist. The level of assistance can then be selected on a handlebar-mounted display. Once it is understood that riding an electric bike doesn’t mean that that the rider has given up having any kind of input at all, the exercise benefits become much clearer.

Electric bicycles can help with fitness

Exercise is an important part of a healthy lifestyle and many people purchase a bicycle with the idea of cycling to get fit. All too often the bike ends up languishing in the garage or shed because “there’s just too many hills near us” or “I like to ride but its the coming back that’s the problem”. Statistics show that electric bike owners are much more likely to get out on their bike and to ride further. The confidence in knowing that they can have assistance with that hill or help with the return journey makes them much more likely to go by bike. 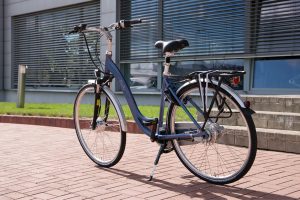 The benefits to commuters are many-fold particularly in towns and cities. Leaving the car at home and going by electric bike saves on fuel and parking charges and has a positive impact on the environment too. Not only are you having a ‘green’ effect by reducing emissions and noise pollution they can also have a positive effect on stress levels when you no longer have to sit in traffic jams. It is often possible to choose traffic-free routes; an electric bike is counted as a ‘bicycle’ so you can ride it on cycle paths.

Some would argue that a conventional bicycle could fit the bill, but not many want to arrive at work all hot and worn out after a hard bicycle ride. It takes much less effort to maintain a steady speed with an electric bike and longer commutes can easily be tackled. 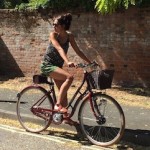 Electric bikes are ideal for leisure riders too. What could be better than the chance to get out in the fresh air to enjoy the countryside or cityscape? The concept of electrically assisted riding has been fully embraced by motorhome and caravan users who see them as a fantastic extension to their holiday experience. This is particularly true for motorhome owners who like the freedom an electric bike can give. Once they have parked their motorhome there are great advantages in leaving it all set up and taking to their bikes to visit the local attractions, shops and hostelries.

A battery bike is fun to ride

Summarising then, why should you own one? An electric bicycle is kinder to the environment than your car, easier to ride than a conventional bicycle, provides exercise, can save you money, handy for luggage carrying (such as shopping), great for mums and dads who transport toddlers and small children and most importantly Fun to Ride.

An electric bike – the logical choice